You can download my CV and a list of talks and interviews I’ve given. If you would like to contact me, please email flo@teapoweredgames.co.uk. For a quick overview of my work, here are selected projects:

Dialogue follows Lucille, a writer working on her second novel. It’s a game made up entirely of conversations, each of which has different mechanics. I was the main writer for Tea-Powered Games, and created the whole script, as well as writing character biographies and excerpts from Lucille’s novel which can be found in-game, and most of the menu and tutorial text. Since the conversations played out mechanically, I worked with the designer to create fluid, interesting conversation systems, rather than just adding words to a pre-existing system. In addition, I designed and created User Interface assets and additional art assets.

Click here to find out in more detail how conversations in Dialogue were structured, or get the game from Steam and Itch.

Tea-Powered Games’ second project. Explore a modern optimistic world, where technology has developed to coexist with nature and society has evolved in a cooperative direction. Players embody Clara and explore what identity means to her as she returns home at the end of her studies. As a role-playing game where combat is replaced by conversation encounters, Elemental Flow is at times humorous, but at time serious, as it deals with discussion topics that are relevant in our modern society. Demo available for free here. 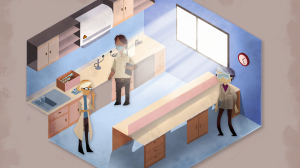 “In Dish Life, you learn about the life of a stem cell researcher and further your scientific career by taking care of your very own stem cell lab. Deal with the real-world struggles and challenges that stem cell researchers face and make choices which affect the way you play.”

I was the lead writer for Dish Life, now available on Steam! I created scenarios and player choices that showcase what it’s really like to work in a biological research lab. It was a really fun opportunity to get to use my research knowledge in a game!

“You’ve been haunting old Mrs Fagles for decades. Now she’s sold the house, and the new owner’s moved in. Sylvie’s broke, bad at plumbing, and anxious about everything. And with a living, breathing, fretting roommate, how are you supposed to rest in peace?

Drink blood. Set fires. Tell lies. Give advice, loan out a wedding dress, reclaim your true name. Remix your dialogue options to reflect your mood or dig deeper into the topics that interest you.”

I designed the User Interface system for Restless, as well as creating all art assets.

Co-organiser for the Oxford and London Interactive Fiction Group

Since late 2018, I’ve been helping run the monthly Oxford and London Interactive Fiction group. We find talks and tutorials that the interactive fiction community are interested in,and host them at the London South Bank University campus.

A Sincere Attempt at Writing Tales of Moran

“Dorian Stanhope, self-proclaimed author extraordinaire, grows bored of his best-sellers and decides to put together his next book without writing any of it himself. However, the prosperous city of Moran is populated by people so boring to him that he can barely deign to speak to them, let alone request their writing. In a stroke of blind luck, he stumbles upon his first contributor, Evelyn, who steers not only the trajectory of Tales of Moran, but also Dorian himself.”

Tales of Moran was my first published work, a humorous novella that is available through Amazon US and UK.

I have released a number of small (15min-2 hour), free games on my itch.io page. These have been a chance to work with different engines, from Unity to Gamemaker to Twine, as well as create smaller projects and go through the release process. They deal with a range of subjects, from fantasy tropes and feline evolutionary trees to recurring nightmares, asexuality and family relationships.