RSS
← Dialogue and Updates
Dialogue on Steam, the IFComp and other Updates →

The Mechanics of Dialogue

In Dialogue: A Writer’s Story, you play out a year in the life of Lucille, a writer working on her science fantasy novel, whose content is highly inspired by her neighbour Adrian’s research subject, biochemistry.

Dialogue is grounded in real life challenges and tensions, telling the story of relatable but interesting characters. It spends most of its time on two different subjects.

The first is the creative process, both in Lucille’s writing of her novel, and other people’s reactions to it. The player will have insight into Lucille’s struggles and triumphs as she changes characters, creates twists in the story and struggles to find a satisfying conclusion.

The second is how real scientific research is carried out, and how it is seen by people outside of the research community. Adrian’s year is focused on working with his unruly cells, and the player will get to experience the worries and joys of being a researcher.

Active Conversations occur in real-time, as options appear and disappear regardless of whether the player chooses to say them or not. The options are separated into three different types (Supportive, Challenging and Open-Ended), and can be more or less effective, all depending on the words said and the character(s) Lucille is speaking to. In addition, players have different equippable focuses, which change how they play. For example, Even Tone lets Lucille say Challenging or Supportive things in a neutral tone (having the effect of an Open-Ended statement), and Thoughtfulness rewards silence by increasing the effect of a statement after four silences.

Writing active scenes was an interesting challenge – all of the possible conversation configurations had to flow into each other, revealing the same necessary information but having enough variety to make conversations different. In addition, certain characters have their own mechanics – Adrian doesn’t like to be interrupted in certain sections, Jacob doesn’t want to be derailed when he’s excited, Marina needs you to fill awkward pauses, Amal doesn’t respond well unless you’ve proven yourself to him first. I worked closely with Dustin, the designer, to make sure that these all made for enjoyable conversations. Sometimes that involved changing the structure of a scene, other times it meant rewriting the same section until it flowed to and from many directions.

Below is an example of the first few lines of an active scene. Most active scenes had 18-25 ‘lines’, and one or two convergence points (or ‘breaks’).

A few lines of an Active Conversation, showing multiple ‘tracks’ and where each panel leads. Click for a higher resolution version.

These conversations have individual panels containing segments of text, and the player can navigate between panels to follow the flow of conversation. In addition, players have Thoughts (questions Lucille has that can be answered within the text itself) and Perspectives (ways of seeing the world that are more broad than Thoughts). For example, the player might use the Thought ‘I wonder what Jacob thinks of character X’ in the panel where Jacob says he liked X’s representation in chapter five. She might use the Perspective ‘Responsibility’ when Jacob talks about having to do extra work hours. Either of these can unlock new Focuses (for active scenes), collectables (biographies and novel excerpts) or open up new panels to further explore the conversation.

A Twine Prototype of the first Exploratory Conversation

Emails are a smaller part of Dialogue, having less mechanical impact than the other two scenes but playing an important role in both pacing and showing Lucille’s character.

Email threads usually begin with an email Lucille receives from someone else, which she replies to. Most of the text of her reply is set, but there are a few options she can click on to choose her type of response, either Challenging, Supportive or Open-ended. Each time she clicks to change a response, she explains why she removed it, for example saying it was ‘too sappy’ or doesn’t explain things clearly enough. This shows how Lucille could have complaints about all of her wording choices, but ultimately the player has to choose one to be able to send the email.

In previous iterations of Dialogue, emails counted as Challenging, Supportive or Open-ended depending on how the player responded, but we decided that the emails didn’t have much replay value (since the player could cycle through all the replies) so that aspect was removed in favour of keeping emails as a way for the players to learn more about characters as a relaxing break. 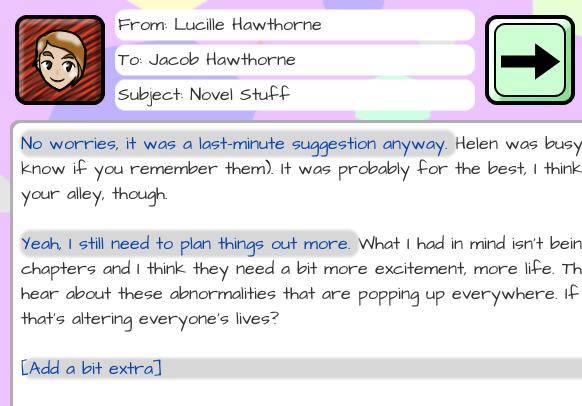 A section of an Email, showing links to cycle through answers, or add text.

Hey Poor Player – “True to its name, it boasts the most comprehensive dialogue system I’ve ever seen in a game… In Dialogue, understanding and empathizing with people is very much an end in itself. …I found myself wanting to be more like Lucille – someone genuinely interested in people and their complex personalities.”

VideoGamer – “There’s a nice mingling of science and creativity, and it realises the process of sieving information to get to the nuggets of interesting and imaginative things remarkably well.”

Fuwa Novel – “Dialogue: A Writer’s Story is probably the best depiction of what it’s like to be a writer you’ll ever find in games.”

Comments Off on The Mechanics of Dialogue

← Dialogue and Updates
Dialogue on Steam, the IFComp and other Updates →